Nitro Member
What Funny Car drivers were the hardest hitters of their equipment? Drove the cars like animals? Burn outs, dry hops, leggin' it past the lights?

My top 3.
1. Terry Hedrick in Pete Seaton's Seatons Shaker Corvair, just abused the thing puttin' on a show.
2. Johnny White and his "Houston Hustler"
3. Russell Long in Dennis Fowlers 'Sundance' Monza, some of the best burn outs of the 70's.

That was Flash Gordon Mineo.

Nitro Member
Lew Arrington in the Brutus FC. Seaton's Shaker flopper. Broadway Freddie. Many of the match race guys that I saw in the 70s and 80s that had no sympathy for their gear; hard burnouts, harder dry hops. Drivers that drove it like they stole it.

Nitro Member
The remote kill switches are a safety feature that make sense with today’s cars. Modern day fuel cars are just a different animal than those of the era being referenced.

Nitro Member
And the throttle stops are necessary because the accelerator on today's nitro cars is more like an on-off switch, especially on burnouts since the load on the engine is minimal. Trying to crack the throttle by foot for a burnout is nearly impossible and would almost certainly result in over-revving.
C

Nitro Member
Doesn't anyone miss the days when driver does the burnout, and the blower explodes, case goes up in the air 100' and the rotors go bouncing down the track wildly..... heh heh Sorry couldn't resist that. One of my treasures is a piece of blower that exploded off an AA/FA on the starting line, at the late Speedworld years ago. Anyone who has been around the drags for a long time has exploding blower stories, some pretty hairy.
B

Nitro Member
I think Scott Kalitta circa the Oldsmobile/Ford days deserves mention. You could see him white-knuckling the steering wheel and brake handle just while warming up the vehicle. Sometimes it looked like he was a bull rider exiting the chutes, the way he stomped the pedal and muscled the brakes while on the stands.
R

Nitro Member
So... the issue is "modern fuel cars".

Cliff said:
Doesn't anyone miss the days when driver does the burnout, and the blower explodes, case goes up in the air 100' and the rotors go bouncing down the track wildly..... heh heh Sorry couldn't resist that. One of my treasures is a piece of blower that exploded off an AA/FA on the starting line, at the late Speedworld years ago. Anyone who has been around the drags for a long time has exploding blower stories, some pretty hairy.
Click to expand...

I don't remember the car, but I was at OCIR years ago when a nitro FC or TF blew either/both engine/clutch/trans and the flywheel took off straight up the air for several hundred feet. It was still spinning at some ungodly RPM when came back down, hit the track, and took off for the pits. I was always amazed that it didn't hit anybody/anything and go through them like a buzzsaw.
T

Nitro Member
That was Larry Bowers TF ride. I was sitting in the top end seats and witnessed the whole deal.

My question of hard hitters for the most part deals with the 60's, 70's and 80's as of course the cars today can not be driven like they once did, something I really miss is the show put on back then.

I have mentioned Hedrick a number of times on this board in the last 6 months, he was such a abuser in a good way with Pete's car.

On a night in 67 when Pappy booked a bigun at Lions, Hedrick sealed the deal for me. A fall night at Lions (awesome time of year at 223rd& Alameda) had Terry in the right lane under the lights. I so recall this vividly as I was standing right up against the fence at the line for his run. He had walked up to his ride like a silver gladiator, opened the door, got in and somewhat disappeared in the blue tinted windows and fired up the rat. The car in my view never sounded like it was 100% right, but I reckon it was. Hedrick got the car moving forward and then like a brute mashed the gas with out water at the time and did 1 rippin' burnout.

He backed up with a attitude, then must of done 3 or 4 dry hops behind and over the line. Terry staged Pete's car, then left in a monstrous wheelstand on the bumper to wow the normal huge Lions crowd. He was so hard on parts. When I joined my dad back at 'our' seats he said, did ya like that? Yep. I am at this moment looking at that shot I have in my collection.

Nitro Member
Burnout don't hit hard on equipment if you knew how to do them... Alot of the people awarded an affinity to do good burnouts, are wrongly tagged.., seriously.

If I had to give the trophy for the guy who could, would, knew how, knew when to, knew when NOT to, and could put smoke out of every hole of a funny car simultaneously if needed...

Second goes, for the same reasons, to Dad..

Sure , more people may claim other drivers - but, those people aren't qualified to know what they are judging... trust me.

If you aint got the front wheels smokin' .. you aint doing it right.. 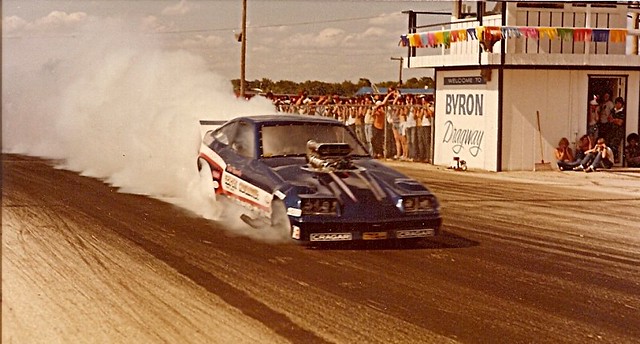 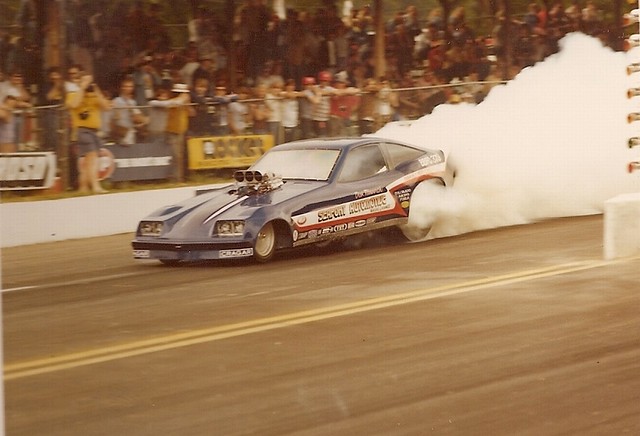 Nitro Member
OK, a burn out where the smoke is also exiting the side windows of the car, so much smoke that you can't see the driver. Have seen that many times & what a show! I really did like the Chi Town burnouts cuz there was so much smoke for such a long distance. On the other hand, Big Jim Dunn was infamous for just doing short burnouts; said long burnouts weren't needed. He was probably right, but doing a burnout was part of the show.
T

Nitro Member
Russell Long was one of the few drivers who actually shifted the car on a burnout,that can bee seen and heard on a YouTube video from US. 30.

Nitro Member
Huh.. why do you think he needed to shift..??

Naw, the issue is 50 - 70 year old men stuck in a time warp.
You must log in or register to reply here.
Ways To Support Nitromater