Constant Aviation Factory Stock Showdown Nears Finish Line with NHRA Midwest Nationals
​
ST. LOUIS (September 23, 2021) --- The penultimate race of the Constant Aviation Factory Stock Showdown, the NHRA Midwest Nationals, will begin Friday from World Wide Technology Raceway outside of St. Louis, Missouri. Season-long point leader Aaron Stanfield, driver of the Stanfield Racing Engines COPO Camaro, has a strong chance of wrapping up his second consecutive Factory Stock Showdown championship and the battle for spots in the top ten will be in full swing throughout the weekend. Three weeks ago Jesse Alexandra became the sixth different driver to win a national event in this hyper-competitive class that features Chevrolet COPO Camaros, Ford Cobra Jets, and Dodge Challenger Drag Paks racing for manufacturer bragging rights and personal pride.
Stanfield opened the season with a win at the historic Gatornationals in Gainesville, Florida but he hasn’t visited the winner’s circle since. He has come close with runner-up finishes at the SpringNationals in Houston and at the prestigious Dodge//SRT U.S. Nationals in Indianapolis. His COPO Camaro has run well at every event and the young driver is looking forward to getting back to the track.
“I have a lot of confidence,” said Stanfield. “We have been working really hard and we have a little bit more work to do to try and get better. We have had a good race car all year and made consistent runs. I am confident we are going to get it done this weekend.” 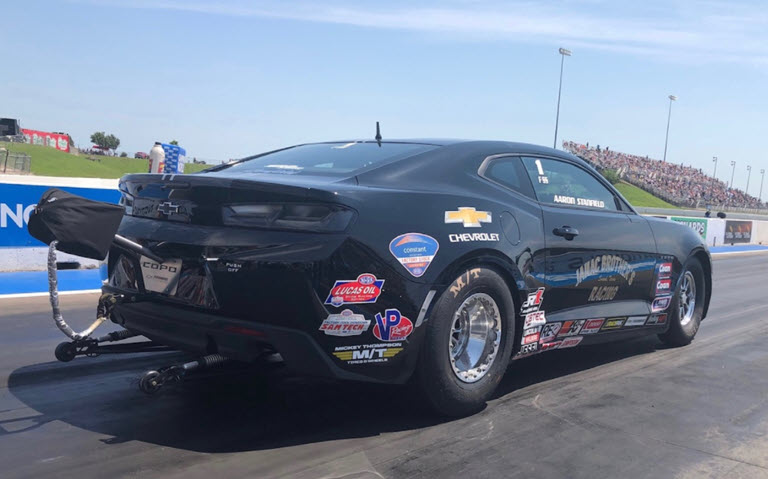 Constant Aviation Factory Stock Showdown points leader Aaron Stanfield
​
In addition to competing in the Constant Aviation Factory Stock Showdown, Stanfield also campaigns a Chevrolet Camaro in the Pro Stock category of the Camping World Drag Racing Series. The two Camaros are vastly different racecars when it comes of handling and driving but the challenge of racing two classes keeps Stanfield sharp during the races.
“I have done it enough to where it is not very hard,” explained Stanfield. “I have made a good bit of runs in both cars. I wouldn’t say it is that big of a deal. Obviously, they are totally different racecars, and they drive totally different. I think just the fact of being able to get into a groove and get rolling seems to help me to get on a roll.”
The factory stock hot rods are crowd favorites for a few reasons, but it is the wheelies they pull when they leave the starting line that have fans jumping out of their seats at national events across the country. When these Camaros, Challengers or Cobra Jets take off the front wheels will leap off the track as the cars accelerate to over 170 mph. For Stanfield and the rest of the class finding the optimal power balance is a tricky combination but the drivers say when they hit it perfectly it is an amazing feeling.
“I guess the best way to say it is that it is poetry in motion,” said Stanfield. “You can feel it accelerating hard when the front end is up off the ground just a little bit. You don’t want it too high, and we like it to come up just a little bit. You can just feel how hard it is accelerating and that is a heavy car moving really fast and you can tell that.”
Several tough competitors will be trying to close the points gap on Stanfield including Alexandra, who in addition to winning the U.S. Nationals collected the $1,000 Factory Stock Showdown Bounty for defeating Norwalk winner John Cerbone in the semifinals. Alexandra will now carry the bounty during the NHRA Midwest Nationals. Veteran factory stock racer David Barton is a definite threat to collect his third bounty of the season as well as collect his second win. Four different drivers have taken an extra $1,000 payday thanks to the unique bounty program this season.

This weekend’s racing schedule:
The first round of qualifying will get underway on Friday, September 24 at 4:30 p.m. with two more qualifying rounds on Saturday at 12:25 p.m. and 2:45 p.m.
Final eliminations will commence on Sunday, September 26 at approximately 11:50 a.m.
After two additional elimination rounds the final round will begin on Sunday at approximately 3:40 p.m.
The event will be televised nationally on FS1 from 2:00 p.m. – 5:00 p.m. EDT