TOPEKA, KS (August 11, 2021) --- The Constant Aviation Factory Stock Showdown will head to Kansas for the Menard’s NHRA Nationals presented by Pet Armor this weekend, August 13-15. The teams will be eager to get on track following the challenges of the first-time event three weeks ago at the Mile-High Nationals at Bandimere Speedway. Stephen Bell, of Shreveport, Louisiana, took the win in his Chevrolet COPO Camaro over Leah Pruett in her Dodge Mopar Challenger Drag Pak. It was a tough event as drivers and teams worked to maximize power in the thin mountain air outside of Denver, Colorado.
“In Denver you had no oxygen so you had to trick the car,” explained Bell. “The timing curves were different along with all the rations and set-ups. The great thing about going back to Topeka is we were able to win there the last time the race was contested. As humbly as I can say it, I am really looking forward to coming off a win and being the defending champion at the next race. It has been a wonderful three weeks and I am super excited about the win and winning as a team.”
In 2019 Bell took the Menards NHRA Nationals title from the No. 12 qualifier spot defeating Arthur Kohn in the final round. Bell also posted low ET of the event, a 7.908 second pass, in the final. It was a dominant performance the Louisianian would like to repeat this weekend. The car dealer has been enjoying his most recent win. 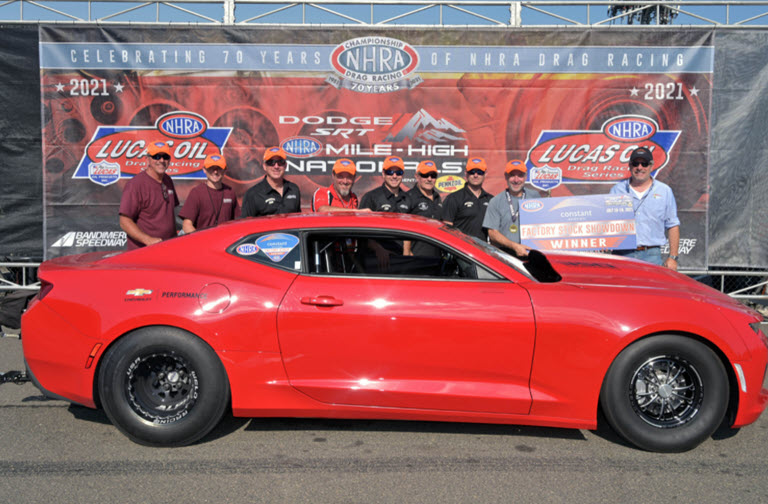 Stephen Bell, Denver winner, photo courtesy of Auto Imagery​
“It has been fun,” said Bell. “In a perfect world you would want to win the last race of the season, so you have three or four months to think about it. Any time you are fortunate enough to win a national event you enjoy it. It is why we all do it. I have enjoyed the two or three weeks reflecting on all our good fortune. I am pretty excited about getting back in the car to see if we can do it again.”
Bell will be at the top of another tough field of factory stock race cars in the Constant Aviation Factory Stock Showdown. For the Ford Cobra Jet, Chevrolet COPO Camaro and Dodge Mopar Challenger Drag Pak teams Heartland Motorsports Park will provide a fast race track for them to create high horsepower and low elapsed times. Drivers like point leader Aaron Stanfield, Pruett, David Barton and Arthur Kohn will all be looking to get a win in Kansas. With the Mile-High victory in hand the $1,000 bounty will be on Bell this weekend. The added attention only increases the excitement level for the veteran driver.
“I am a car dealer and I have always enjoyed motorsports, drag racing specifically,” said Bell. “My dream was to have a factory produced stock or super stock I could race. I have enjoyed watching what this class has become. The fact it is a stand-alone class brings a lot of credibility to all the manufacturers. It has turned out to be a win for all parties. I think the fans like seeing production cars with big wheel stands and they are pretty fast cars.”
In Denver, SpringNationals winner and Norwalk No. 1 qualifier, Barton carried the bounty target into the event. In the second round Kohn took him out with an 8.370 second pass, before eventually falling to Bell in the semifinals. Each race this season has seen the bounty driver fall and with $1,000 on the line it will once again create added excitement for this class.
The first round of qualifying will get underway on Friday, August 13 at 7:15 p.m. with two more qualifying rounds on Saturday at 2:15 p.m. and 5:15 p.m. Final eliminations will commence on Sunday, August 15 at beginning at 11 a.m. CDT with the first round of the Constant Aviation Factory Stock Showdown slated for approximately 12:20 p.m. The event will be televised nationally on Fox beginning at 2 p.m. CDT.